The city is the capital of the Upper Silesia region, historically famous for many coal mines and heavy industry but now a leading Polish city in the terms of modern and innovative industries such as IT companies and startups. This short film is an illustration of Katowice's fast development and its new face also manifested in the science development. Tt is not surprising that Katowice is the European City of Science 2024 . The EuroScience Association, which awards the ECS title, recognised, among other things, the exemplary cooperation of the city authorities with the universities organising the Silesian Science Festival KATOWICE, headed by the initiator and leader of the undertaking, i.e. the University of Silesia.

The prestigious title of the European City of Science has been awarded every two years since 2004. The goal of the initiative is to deepen the changes accompanying the transformation of society in these cities and regions towards a science society, to show the richness and diversity of the European scientific landscape, and to foster self-development, scientific integration, and interest in science among younger generations and the development of European research without barriers, to strengthen the European and international profile of the scientific community in the city and the region, to increase the involvement of citizens and the scientific community in local problems, to trigger public investment in regional science and its infrastructure, and to boost tourism. Along with the ECS title comes the right to host the EuroScience Open Forum (ESOF) in 2024. This event takes place every two years and is dedicated to research and innovation crucial for the world's future. ESOF Katowice 2024 will be one of the world's most prestigious science and technology events.

At the same time, the Upper Silesia region is promoting its industrial past with many historical places and monuments. Close to Katowice is located the best known historical Polish city, Krakow, worth visiting in every season and weather. The next special place for foreign visitors is Auschwitz-Birkenau nazicamp about 40 min by car from Katowice), which has a totally different climate than the beautiful city of Krakow, but which is one of the most important historical places in the world.

Also, the location of this city is no accident. It is well connected, with 3 airports less than 100 km away and some of the biggest national roads and train lines running through it. Katowice is additionally equipped with great public transport - buses or streetcars and car, scooter or electric scooter rental systems.

If you want to learn about Silesian culture and tradition or tourist opportunities in Poland click on the corresponding links. 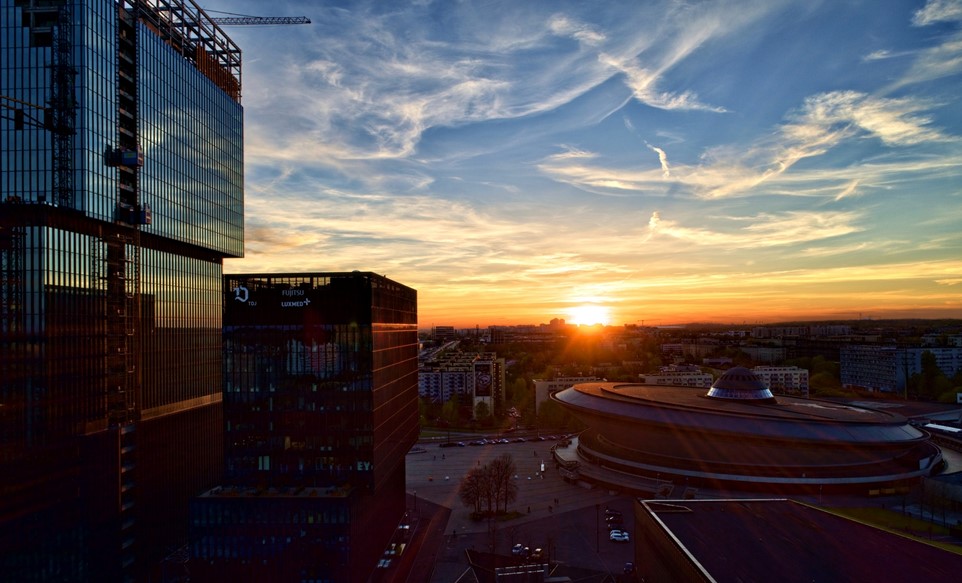 View of the city.  Source: Babulashotsdron

Where are we going to meet?

Get to know our venue. The International Congress Centre (ICC) in Katowice is among the best facilities in Poland for business events. Finished in 2015, the building is characterized by its post-industrial aesthetic and functional design. The International Congress Centre was established in the heart of the Culture Zone, in a new and revitalized space near the iconic Spodek complex. Spodek means ‘saucer’ in Polish and it comprises a multipurpose arena with a gym, an ice rink and a hotel.  There are also other unique buildings at this location such as the seat of the Polish National Radio Symphony Orchestra and the Silesian Museum.

The architectural design of the International Congress Centre won first place in an international urban architecture competition. The ICC's winning architecture was designed by JEMS Architekci in Warsaw. The main idea was to channel the modernist architecture of Katowice that together with Spodek would create an appealing recreational area. Hence the Green Valley runs through the centre of the ICC, connecting it with Spodek and generating a synergy between the two buildings and the events taking place therein. The ICC terrace overlooking Spodek has become a favourite hang-out for locals. 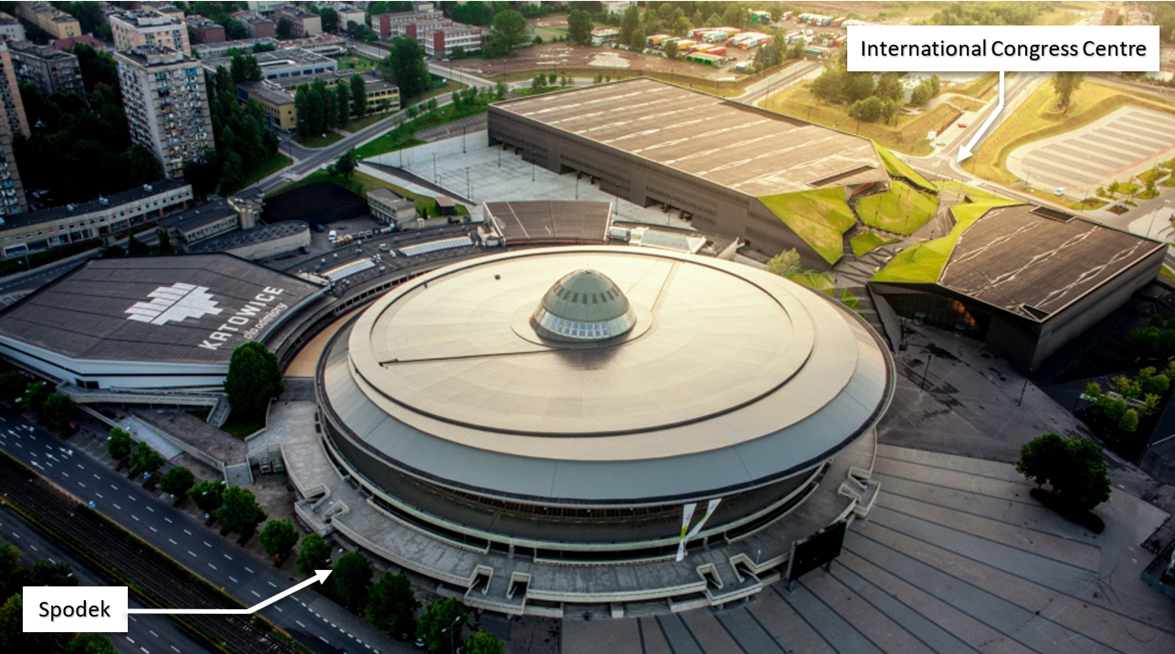 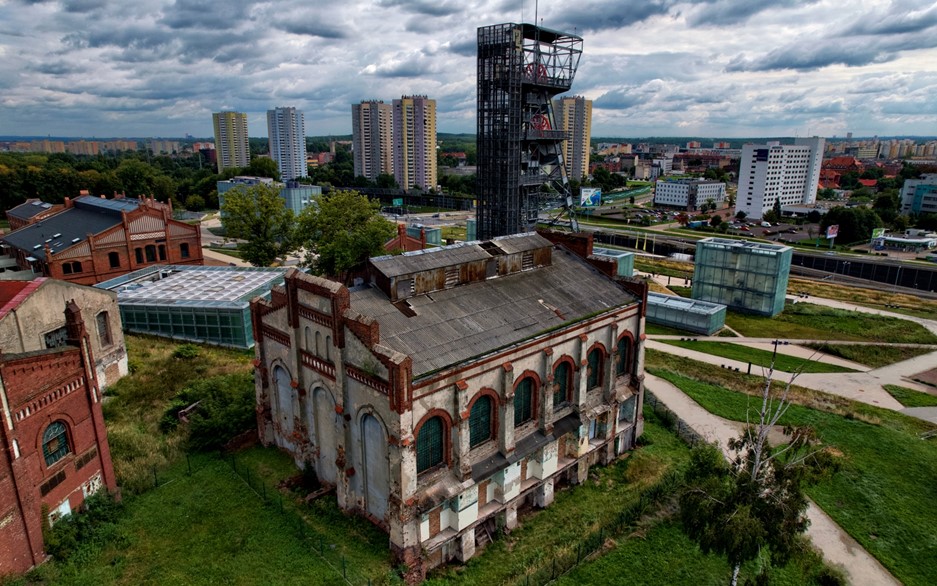 How to get there?

The proximity of international airports in Cracow, Kraków-Balice (70 km, around 50 min.) and Ostrava (100 km, around 1h) make the ICC easy to reach from many destinations in Poland, Europe, and beyond.

Madrid (Spain) ➝ Cracow-Balice without transfers flight duration approx. 3 h 15 min. or with a transfer of about 5 h.

The best way to get from Katowice-Pyrzowice Airport to the centre of Katowice is via the AP metropolitan transport line, which runs on average every 30 minutes and the journey takes less than 40 minutes. The bus runs from the stop Pyrzowice Port Lotniczy (Katowice Airport) and you can get off at the first stop Katowice Strefa Kultury (near the Silesian Museum, about 1 km from the Venue). A ticket can be purchased from the driver for approx. €1 / PLN 5 (preferably in PLN coins).

From Cracow-Balice Airport, the best way to get to Katowice is by bus. This route is served by several carriers, including Neobus, UniBus, Leo Express, Bus Inter and FLIXBUS. The journey should take around 1h15m and cost no more than €10. Timetables can be found on the busy-krk, busradar or flixbus website. Most buses stop at the Katowice (Sądowa) bus station. 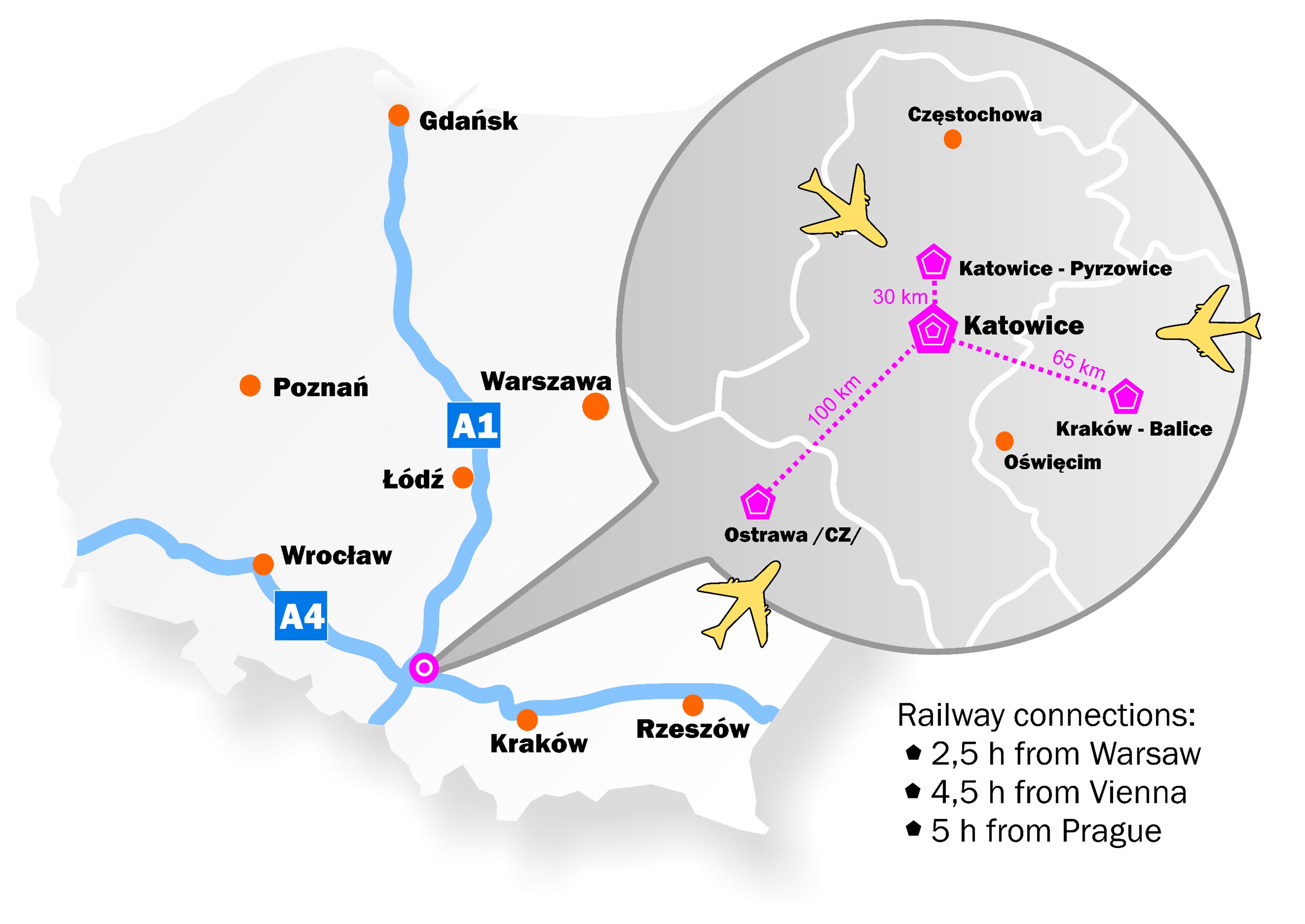 A more environmentally friendly solution is to get to Katowice by land. To do this, it is useful to know about land transport search sites (railways and buses) which provide route and price information and other tips such as www.omio.com, www.seat61.com or www.thetrainline.com.

Popular rail carriers operating trips to Poland are PKP Intercity or DB Lines. To check a bus connection from your country to Katowice, visit www.flixbus.co.uk and www.regiojet.com.

Trains stop at Katowice (Dworzec) station (1,5 km from the venue) and the International Conference Centre can be reached from the PKP train station:

Buses (flixbus etc.) usually stop at the Katowice (Sadowa) bus station (1,7 km from the venue), which is located between the main station and the venue (see the map below).

The most important communication points in the centre of Katowice. Source: own

It is also possible to change trains in border cities: Frankfurt (Oder) in Germany and Bohumín in Czech Republic.

Journey times will be longer overland than by air, but when you factor in the time it takes to get to an airport, check-in etc you may find train travel is just as efficient – and you can use the time more effectively to read or finalise your presentation slides.

The location of the ICC near highways A4 and A1 makes it easy to reach from many places within Poland and Europe. Numerous car parks in the vicinity allow convenient access to the facility. 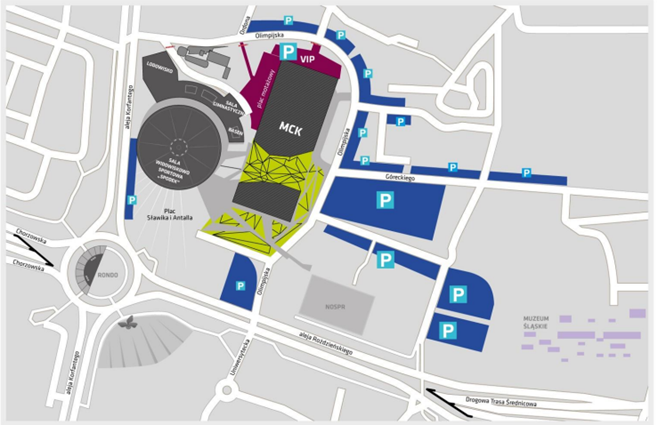 By tram and bus

The bus and tram stops closest to the International Conference Centre are "Katowice Rondo", "Katowice Spodek", and "Katowice Uniwersytecka".